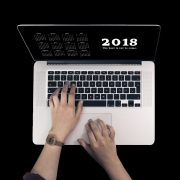 Year after year, cybercrimes like scams, fraud, identity theft and data breaches make a global impact on consumers and businesses alike. Organizations like the Federal Trade Commission and the Identity Theft Resource Center keep tabs on the statistics and the aftermath of these events in order to form a clearer picture of their effects. With only days to go until we reach the end of 2018, here’s a look at some of the numbers from this year.

Top Scams of the Year

According to a report by Heimdal Security, phishing attempts continue to be one of the more prevalent ways scammers connect with their victims. Phishing usually arrives as an email that entices someone to take action; the action might be to send money, hand over sensitive data, redirect to a harmful website, or even download a virus from a macro contained within the email. No matter what the story the scammers use, one-third of all security incidents last year began with a phishing email.

What happens to consumers when they fall for a phishing email? One in five people reported losing money, around $328 million altogether. That’s about $500 per victim on average, but that’s also only from the victims who reported the scam. Interestingly, new data this year found that Millennials were more likely to fall for a scam than senior citizens, although seniors still lost more money on average than these younger victims.

The ITRC’s annual Data Breach Report highlights the organizations that have been impacted by data breaches throughout the year, along with the number of consumer records that were compromised. While the year isn’t over, the data compiled through Nov. 30 is already worrisome.

There have been more than 1,100 data breaches through the end of November 2018, and more than 561 million consumer records compromised. Those breaches were categorized according to the type of industry the victim organization falls under: banking/credit/financial, business, education, government/military and medical/healthcare.

The Crimes that Made Headlines

There were quite a few headline-grabbing security incidents this year. While Facebook and the Cambridge Analytica events were not classified as traditional data breaches, they were nonetheless an eye opener for social media users who value their privacy. The Marriott International announcement of a 383 million-guest breach of its Starwood Hotels brand has opened consumers’ eyes about the types of information that hackers can steal, in this case, 5 million unencrypted passport numbers. The breach of the government’s online payment portal at GovPayNow.com affected another 14 million users, demonstrating that even the most security-driven organizations can have vulnerabilities. Finally, separate incidents at retailers and restaurants like Hudson Bay and Jason’s Deli reminded us (and those breaches’ combined 8.4 million victims) that attacking point-of-sale systems to steal payment card information is still a very viable threat.

What Do Criminals Really Steal?

In every scam, fraud, and data breach, criminals are targeting some kind of end goal. Typically, it’s money, identifying information or both. But recent breaches this year of websites like Quora—which provides login services for numerous platforms’ comment forums—also show that sometimes login credentials can be just as useful.

After all, with the high number of tech users who still reuse their passwords on numerous online accounts, stealing a database of passwords to a fairly innocuous site could result in account access to so-called bigger fish, like email, online banking, major retail websites, and more. Furthermore, it showed that a lot of users establish accounts or link those accounts to their Facebook or Gmail logins without really following up; a lot of people who learned their information was stolen in the Quora breach may have forgotten they even had accounts in the first place. The number of victims in that breach is expected to be over 100 million.

Moving Forward into the New Year

The biggest security events of 2018 may pale in comparison to criminal activity next year. After all, there was a time when the Black Friday 2013 data breach of Target’s POS system was considered shocking. One thing that cybercriminals have taught us time and time again is that there’s money to be made from their activities, and they aren’t going to give up any time soon.