Are You Working Two Jobs? 500K People Are, But Don’t Know It
Blog - Latest News 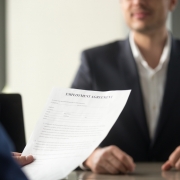 Identity theft is not a single crime. One might envision someone stealing a checkbook or credit card numbers, then racking up debt in someone’s name. The reality is thieves can use people’s identity for a number of different things, including seeking medical care, applying for government assistance and disability, taking out student loans and more.

A common form of identity theft involves employment. Employment identity theft happens when a criminal accesses someone’s personally identifiable information and uses it to get a job. Why would someone pretend to be someone else in order to work? It could be to avoid paying taxes at the end of the year (by earning money and then not having to claim it on their own taxes) or because the individual in question is receiving unemployment or disability benefits and wants to continue those benefits while working. The criminal may even be taking in other types of government assistance like SNAP benefits or subsidized housing, and they want to make sure their new income doesn’t make them ineligible for those benefits.

That’s where the victim comes in. As part of employment identity theft, the thief applies for a job with the victim’s information, taxes are recorded through their payroll department, and the victim gets stuck footing the bill for their earned income. The victim’s job might pay them $30,000 a year, but they are about to pay taxes on the criminal’s additional $40,000-a-year job, or the victims other job, as it looks on paper.

Unfortunately, employment identity theft is more common than one might think. In fact, the IRS discovered a computer error that failed to notify a lot of victims. New victims were flagged by the computer and informed that someone else was using their identity for employment, but it didn’t factor in people whose information had been stolen in the past and was being re-used for employment fraud. In 2017, around 500,000 Americans’ identities were used for this crime, but only around 40,000 were flagged by the computer and notified as new victims.

The IRS has received a number of recommendations about how to correct this issue and other identity theft problems. However, consumers should also play their part. If someone knows that their personally identifying information has been compromised in the past, they should not assume it can’t happen again.  Not only can it be used again, but it can also be sold to another criminal. It is important for people to file their tax returns as early as possible so any issues can be caught.

Finally, people should monitor all of their account statements carefully and take immediate action if anything suspicious occurs. If someone believes they are a victim of employment identity theft, they should contact the Identity Theft Resource Center for toll-free, no-cost assistance at 888.400.5530, or live-chat with an expert advisor.

For on-the-go assistance, check out the free ID Theft Help App from ITRC.

Brushing Scam: Can It Really Hurt You?