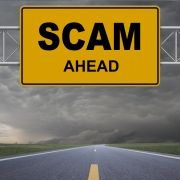 When a disaster strikes, there’s often a heart-tugging sadness that comes from the powerless feeling to do something useful. As distanced bystanders, we’re left reeling from the news footage of the horrific events, both human-made and natural. Often, we think to ourselves, “If only there were something I could do to help.” Unfortunately, identity criminals use it as an opportunity to prey on people while they are vulnerable and commit disaster relief scams.

Technology has empowered us to support people in their time of need. Charitable giving websites, crowdfunding campaigns, and even the ability to text a donation for a specific cause and then pay it on the following month’s bill have enabled us to lend a hand when needed.

In the instance of the 7.0 magnitude earthquake that struck Haiti in 2010, nearly three million people were killed, injured or left homeless. Relief efforts were mobilized within mere minutes. The Red Cross immediately set up a text-to-donate option, and more than $43 million came in via text.

Flooding in Louisiana in 2016 left tens of thousands of people to take up residence in emergency shelters due to severe flooding. Sixty people died, and more than 40,000 people lost their homes. Many were rescued by boat with nothing more than their clothes, and citizens outside the flooded area were ready to respond in a big way. Celebrities also vowed to help in fundraising efforts.

In 2021 Haiti was hit with another earthquake, this one a 7.2 magnitude earthquake. Over 2,000 people died, and nearly 53,000 houses were destroyed. Volunteers and others at the Haitian-American Community Coalition of SW Florida in Fort Myers shipped hundreds of pounds of food, medical supplies and other items for victims.

Hurricane Ida struck Louisiana, leaving many people stranded and over one million people without power. U.S. Coast Guard members and National Guard units from Alabama, Louisiana, Mississippi and Texas conducted search-and-rescue operations. The Red Cross also set up different ways for people to donate to those in need.

Scammers Take Advantage of the Vulnerable

Sadly, the same technology that lets kind-hearted people participate in helping out has also made it possible for scammers to commit disaster relief scams and bill innocent, well-intentioned people out of their money. They can also steal your personally identifiable information (PII), something that’s far more valuable than a donation of a few dollars.

In 2016, Louisiana authorities warned the public to watch disaster relief scams that crop up online. Only a matter of hours after the attack on the World Trade Center on 9/11, scammers were already soliciting donations for relief efforts, but pocketing the money. It’s the same with nearly every high-profile incident that affects large numbers of victims. Scammers take advantage of people when they are most vulnerable and commit disaster relief scams.

How to Avoid Disaster Relief Scams

If you believe you were the victim of any disaster relief scams, or want to learn more, contact the Identity Theft Resource Center (ITRC). You can speak with an expert advisor toll-free by phone (888.400.5530) or live-chat on the company website www.idtheftcenter.org.