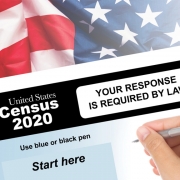 Update as of 8/21/20: The Census Bureau is emailing people who have not completed their forms, asking them to click on a link to complete it. The Census Bureau will also be texting a limited number of people to participate in the 2020 Census User Experience Survey.  While the texts and emails are legitimate, scammers could take advantage of the opportunity, especially given the current climate.

Always Go Directly to the Source

The Identity Theft Resource Center continues to advise people to “go directly to the source” to check the validity of the message before responding. If consumers have already filled out the census and/or participated in the survey, there is no reason to respond to a message about the census. If a consumer has not completed the census or the survey, they can visit 2020census.gov.

In April, all Census field operations were suspended due to COVID-19. The announcement was noted in a press release, “Beginning today, in support of guidance on what we can all do to help slow the spread of coronavirus, 2020 Census field operations will be suspended for two weeks until April 1, 2020.” However, U.S. Census Bureau workers are now going door-to-door to reach households nationwide. With any large political event or happening, scammers try to take advantage of the public and this could mean a rise in census scams.

This important process comes around every ten years, and it helps with things like ensuring a region has adequate representation in Congress, adequate school funding and is cited in scientific research and social surveys. However, it is also time-consuming and can feel really invasive. Page after page will ask questions that might not seem to be anyone’s business. What is your household income? How many cars do you own? How many children do you have and how old are they? How many televisions do you have?

Unfortunately, there has been a sharp increase in identity theft and fraud that masquerades as government agency communications, which could mean an increase in census scams. Scammers try everything from claiming someone’s Social Security number has been suspended to threatening them with police action for unpaid taxes. They can even spoof their email address or phone number on a caller ID to seem legitimate.

There is every reason to suspect that scammers could take advantage of the publicity surrounding the 2020 census in order to steal personal information as part of a census scam. They may even threaten people with jail time if they do not immediately pay a fine since it is technically a crime to not fill out the census.

Here are some things people should remember that will help them spot census scams:

The website for the Census Bureau is census.gov, and the specific website for the 2020 census is 2020census.gov. However, a scammer could easily buy the domain for 2020census.com or spoof their email by swapping a capital 0 for one of the zeros in the number. Remember, caller ID and email domain names are not proof that the person is legitimate.

They will only call you after no response from initial mailings

If the Census Bureau tried to call every U.S. household and take their census data over the phone, we would be ready for the 2030 census before they were finished. They will not call and request information unless someone does not respond to their initial mailings.

They might come to your house, but will not request anything

In some areas, government volunteers serving as census takers will knock on doors. However, they will not request Social Security numbers, bank or credit card numbers or any other payment information. They will also not ask for payments for their time or for the postage on someone’s forms, no matter what the person claims.

The police are not coming to your house

Regardless of what the person on the phone says, the police are not being sent to anyone’s house for failure to fill out the census. Yes, it is required under the law and it is vitally important for a variety of reasons, but the police are very busy. The caller who claims someone can simply pay some kind of fine over the phone, especially with prepaid debit cards or iTunes gift cards, is not being truthful. It is a census scam.

For more information on the 2020  census and survey process, click here.

Worst Places in the U.S. for Identity Theft

New Venmo Scam Is Trying to Give You Money, Not Take It Away

Can you handle this? New @IDTheftCenter social media