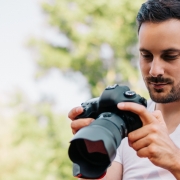 As cybercrimes go, ransomware might be one of the nastiest, which is why lots of attention is being brought to recent DSLR ransomware attacks. Using one of several different avenues of attack, a hacker infects a piece of technology with harmful software that locks up the device. The only way to unlock it and restore access is to pay the hacker’s ransom. What makes it so terrible is that it works. Too often, the victim pays the ransom in order to avoid the inconvenience and expense of losing control over their files and devices.

There are many great reasons to own a fancy digital camera, namely that photographers can take great pictures no matter how skilled or novice the user may be. Some of the newer ones are even easier to operate and enjoy than older digital cameras because the pictures can be sent to your computer, emailed to a friend or relative or uploaded to a print service over Wi-Fi without the need to download them with a cable. Just like you can text a friend a picture that you took with your phone, the newer, more capable digital cameras can transmit pictures.

However, that capability is where the vulnerability lies. Security researchers have uncovered malicious software that can be sent to your camera as part of a recent DSLR ransomware attack, such as over free hotel or airport Wi-Fi at a popular tourist spot. Once there, the hackers just have to alert you that all of your photos have been encrypted. The only way to unlock them is to pay the significant ransom.

There is an easy fix to prevent a DSLR ransomware attack, but you have to be aware of the threat first. If your camera allows, simply turn off the Wi-Fi in order to prevent it from accidentally connecting over these suspicious Wi-Fi options. As an added bonus, turning off the Wi-Fi in the camera’s settings except when you are actively using it to transmit your photos will save your battery life while you are using the camera.

It is worth noting that researchers were also able to encrypt someone else’s photos if they had already infected the user’s laptop. If you are plugging in your camera with a USB cable but a hacker has already infected your computer, they can still lock up your photos. Make sure your antivirus software is installed and up-to-date to avoid that threat in a DSLR ransomware attack. Also, camera manufacturers should now be working on security patches that block this vulnerability. That makes it just that much more important to download any software updates that they issue for your devices.