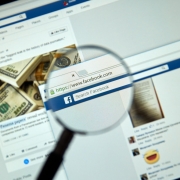 Thanks to a very savvy social media user, the Identity Theft Resource Center has learned more about how scammers are operating international money theft via a Facebook lottery scam. A user reached out to the ITRC for help after very nearly losing a substantial amount of money.

A social media user named Jane* reached out online after receiving a direct message from one of her friends. It said that the friend had won a substantial amount of money in a Facebook lottery and happened to see that Jane’s name was on the list as well.

Jane was given the name of a man to “friend” on Facebook in order to ask about her winnings. The new friend took a lot of her information, including photos of her ID and driver’s license, to verify her identity, then confirmed that she was, indeed, a winner. All she needed to do in order to claim her prize was to submit payment for the fees associated with claiming her prize, roughly £279, which, unfortunately, she did.

However, Jane immediately thought better of it. She went to her online banking portal and transferred all of her money out of that account and into her savings account in an effort to block the transaction from going through. At the time that she reached out, she believes she succeeded in stopping it. The money has not come out of her account, and the supposed lottery official has messaged her several times asking when she will make payment.

How did this happen, and what does it have to do with multiple types of scams?

The original message came from an account that Jane recognized. Unfortunately, it was not her friend. It was either a copycat version of her friend’s account or a hacker managed to gain access to it, probably by guessing the username and password or using stolen credentials.

A phishing scam involves some plausible story about why you need to submit your money, sensitive data, or both. In this case, the thief got away with Jane’s identifying information from her two forms of ID and almost made off with her money.

For years, scammers have shared posts about a “Facebook lottery,” but there was not a clear reason why, until now. After all, most of those old posts did not ask for money or require anything. Now it starts to make sense. Since more users than ever have seen posts about a Facebook lottery or heard mention of it, criminals can actually cash in on the scam.

The victim, in this case, did the right thing by working to stop the payment from going through. However, her situation can serve as a warning to other users. Never share your ID with anyone who does not have proof of why they need it, be very cautious about believing strangers on the internet and remember that there is no such thing as winning a lottery or sweepstakes that you did not enter. You will never win any kind of prize or money without taking action beforehand. Protect yourself, your identity and your funds from these kinds of criminals.

*name has been changed to protect identity of victim

Are You CyberSmart? Majority of U.S. Adults Lack Digital Knowledge Scroll to top