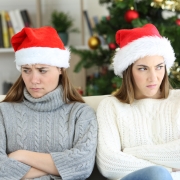 With the holiday season approaching, signs of merriment are everywhere. Store displays have gone up, iconic festive images are appearing here and there, and retailers and advertisers are spreading messages of warmth and good cheer. For far too many people, though, the holiday season doesn’t always mean spending meaningful time with cherished loved ones. Instead, it means identity theft and fraud.

When we hear about identity theft, it’s easy to picture some shady figure in a hoodie and dark glasses, silhouetted by the glow of his computer screen. The reality of identity theft is somewhat different, though. While record numbers of data breaches in recent years mean more consumers than ever are at risk of this crime, a great many cases of identity theft and fraud are the result of someone the victim knows.

It’s so rampant, in fact, that this specific form of the crime has been given its own name: familiar fraud. It can happen when anyone close to you—a spouse, an adult child, a parent, or even a friend, neighbor, or co-worker—accesses your identifying information or existing accounts without your permission and uses it to open new accounts, make large purchases or other similar crimes.

By some reports, familiar fraud has already affected as many as 500,000 children in the US and over 2 million senior citizens. Experts have warned that the number may actually be far higher, though, due to the numbers of victims who aren’t aware they’ve been targeted or because they are reluctant to report someone who is close to them. For too many victims, the process becomes a long journey of paying off someone else’s debt in order to preserve family harmony.

Unfortunately, that’s where the holidays may play an important factor in familiar fraud. At this time of year, it’s far too easy for someone to access your personally identifiable information. It might be a friend who goes holiday shopping with you who takes a quick peek inside your wallet at your personal documents or a distant relative who comes to visit and has the opportunity to go looking for account numbers, Social Security cards, or other papers. Don’t overlook the potential that an unsecured computer or mobile device in your home has for giving a friend or family member access to your logged in accounts, either.

However the familiar fraud comes about, it’s important to remember a few key things. First, it is a crime, no matter who committed it or why. Second, it’s not your responsibility to pay off this individual’s debts, even if you’re pressured to do so by other family members. Also, keeping a close eye on your credit report and your account statements will help you stop suspicious activity the moment it first comes to your attention, or before the matter gets so far out of hand. Finally, there is help out there for you to recover from familiar fraud, and that help does not automatically have to result in sending someone you care about to jail. There are a number of resources that can help you get started, starting with the following Fact Sheets from the Identity Theft Resource Center:

ITRC Fact Sheet 115 – When You Personally Know the Identity Thief

ITRC Fact Sheet 115A – When a Spouse is the Identity Thief

As always, anyone who believes their identity has been stolen or their personal data has been compromised is invited to connect with the ITRC through our 24-hour toll-free call center at (888) 400-5530, the IDTheftCenter.org website, or the new IDTheftHelp app for iOS and Android.