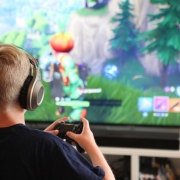 Fortnite is one of the most popular battle royale games on the market. People of all ages play the game to work their way towards the center of the map. However, there is one thing about Fortnite, and other games, that many gamers are not aware of: the massive amounts of gaming data that is collected and stolen.

Every week the Identity Theft Resource Center (ITRC) looks at the most interesting data compromises from the previous week, as well as what happens behind the scenes when someone attacks a company and steals personal or business information in our Weekly Breach Breakdown podcast. This week, we are taking a look at Fortnite in an episode titled “Let the Games Begin!”

The Financial Dominance of the Gaming Industry

What industry made more money in 2019? Video games or movies? The answer will probably surprise most people. Video games generate more revenue each year than movies and music combined. Despite Marvel’s Avengers: Endgame setting a new global box office record in 2019 at $2.7 billion in ticket sales, the film industry’s $42 billion pales in comparison to the more than $150 billion in video game revenue in 2019. The top video game of 2019, Call of Duty: Modern Warfare, racked up $1 billion in sales in the last two months of 2019 alone. Call of Duty is still the number one video game in terms of sales nearly a year later.

One of the reasons the game remains so popular is the same reason why video games represent a significant data risk: someone can play Call of Duty online for free and make in-game purchases. When someone goes to the movies, they don’t give away personal information to buy their ticket. However, when someone wants to play video games online, they have to share lots of data.

The Impacts on Fortnite

Research published by Night Lion Security calculates more than two billion online video game player profiles have been breached in 2020 based on the number sold, or for sale, in underground online forums. It adds up to roughly $1 billion in illicit gaming data sales each year. Of those, Fornite player account information is the most valuable at approximately $600 million per year.

Why? It’s not just personal information being stolen. Instead, its profile gaming data, including game achievements and player personas known as “skins.” With the right skin, a user can become an elite level player without having to play Fortnite or defeat hundreds of players to get to the top of the heap.

Night Lion notes that one highly prized skin commands as much as $2,500 on the black market. Between reselling elite and average player accounts, data thieves who specialize in Fortnite skins earn an average of $25,000 per week, nearly $1.3 million per year.

How Do Data Thieves Do It?

Cybercriminals use automated tools that compare login and password information from past data breaches to active Fornite accounts, at a rate of almost 500 accounts per second. To cover their tracks, the data thieves use masking tools that go for as little as $15 on the dark web.

What You Need to Do

The best security tools in the world cannot help protect gaming data if players use the same logins and passwords on more than one game account.

If you do not, it could be game over.

For more information about the latest data breaches, consumers and businesses should visit the ITRC’s new data breach tracking tool, notified. It is updated daily and free to consumers. Organizations that need comprehensive breach information for business planning or due diligence can access as many as 90 data points through one of the three paid notified subscriptions. Subscriptions help ensure the ITRC’s identity crime services stay free.

If you believe you are the victim of an identity crime, or your identity has been compromised in a data breach, you can speak with an ITRC expert advisor on the website via live-chat, or by calling toll-free at 888.400.5530. Finally, victims of a data breach can download the free ID Theft Help app to access advisors, resources, a case log and much more.

Read more of our latest articles below