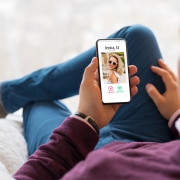 Dating apps continue to grow in popularity as the digital age evolves. With that evolution, dating apps have reported higher than usual volumes of use.

Increase in Users During Social Distancing

They have also seen an increase in users as a result of social distancing. However, dating apps have always been a rich target for hackers. Some notable dating app data breaches since 2018 include Zoosk, Coffee Meets Bagel, OkCupid, 3Fun and many more. Unfortunately, whenever there is an increased interest in a digital space, hackers tend to follow the activity. Users input a variety of personal data points when signing up for a dating app that could lead to account takeover or identity theft—making these apps very appealing to hackers and leading to hacked dating apps.

Higher Risk of Scams and Cyberattacks

However, in regards to hacked dating apps, there is a larger risk of social engineering exploits like sextortion scams and ransomware attacks, which are easy to accomplish with information gleaned from dating app data breaches.

In ransomware attacks, the perpetrator only needs a method of contact for their victims and a plausible reason to contact them. In some cases, there is not even a virus or malicious code involved – just the threat of it. The ploy uses the information from the compromised dating site to threaten the victim with viruses or malware to pay a ransom to remove.

In sextortion scams, scammers will contact dating site users, whether they have visited a site with explicit content or not, and claim they have inappropriate videos or pictures while threatening to release them. However, rarely does a scammer have enough information to make good on the threat.

Be Safe on New Platforms

Singles should remember to put their security first when using a dating app.

Anyone who has had their information exposed or stolen due to hacked dating apps or an identity compromise can also contact the Identity Theft Resource Center for assistance by calling toll-free at 888.400.5530. They can also live-chat with an expert advisor. The free ID Theft Help app can also help victims through their case with resources, a case log and much more.

Average Cost of a Data Breach in the U.S. Rises Despite Decline in Number of...