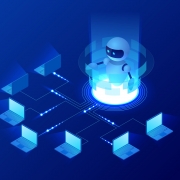 The term “honeypot” is actually an old word with a lot of different connotations. Besides the obvious container for honey, it also refers to any kind of “lure,” whether it’s an attractive person, a lucrative business deal or even a criminal’s bait to snare a victim.

The tech sector has long been flipping the script on honeypots and using them to lure the criminals. Whether it’s an unsecured cache of sensitive information, a website that purposely contains vulnerabilities or some other cyberbait, the result is the honeypot can help security researchers track down cybercriminals and grab their identifying information.

Now, researchers at one university have taken the crime-fighting a step further with the invention of the HoneyBot. This robotic security guard doesn’t patrol the hallways of a building to keep an eye out for intruders, though. Instead, it serves as a connected device that hackers would want to go after, a kind of data honeypot on wheels.

You might already be wondering, “Why does a data trap need to move around?” It’s so simple that it’s genius. One of the ways hackers know they’ve hit on useful data and not a trap is by having the ability to interact with the secret honeypot in a very sophisticated, higher-level way. If there’s nothing really interactive about it, then it could actually warn away cybercriminals. Worse, it could give them a portal to infiltrate a network (the opposite function of a honeypot).

When they’re able to interact with the HoneyBot and send it around the building, they’ll think they’re actually on to something. This makes the robot ideal for factories, manufacturing plants, and even a large-scale infrastructure like a power grid. While the hackers are toying around with the robot and trying to get access to other parts of the network, the HoneyBot is scooping up all of their information and reporting it to the cybersecurity team.

University researchers are expected to share the results of extensive testing in the near future, but this kind of innovation is already an exciting new tool for fighting back against cybercrime.

Read next: “Block the Wi-Fi Nabbers”

The 2018 Impact of Data Breaches and Cybercrime