Identity Theft: Financial Toll, But an Emotional One as Well
Blog - Latest News 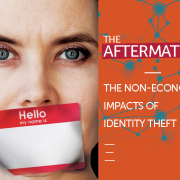 Identity theft is commonly associated with the damage it can do to victims’ finances, especially if the thief racked up tremendous debt. The countless new credit cards, the cars or houses, the new utilities turned on in apartments the victim didn’t rent can all lead to six-figure debt before they even know their identity was stolen.

There’s another serious threat to identity theft victims, one that may be just as harmful, and that’s the emotional toll this crime can take. This side effect can easily be overlooked at first by both the victim and their family members or friends. Worse, outsiders might even treat this side of identity theft as a non-issue, diminishing the feelings of loss, mistrust and even paranoia that victims can feel.

Each year, the Identity Theft Resource Center conducts an in-depth study of ID theft victims who’ve reached out to the organization during the year for help. The study is based on voluntary feedback to a comprehensive set of questions in order to get a better look at the trends and the lasting effects of this crime. The resulting ITRC Aftermath report is then made available to the public, including law enforcement, policymakers and other stakeholders, in order to provide accurate information from the victims’ standpoint.

Year after year, respondents to the ITRC Aftermath survey list some understandable emotional harm as a result of the crime. They’re often left feeling hopeless to resolve their cases and have a generally negative sentiment about their ability to recover. More than 85 percent have stated that they’ve felt worried, anger and frustration and another 83 percent are left feeling violated. Even worse, almost 70 percent of victims say they don’t think they can trust anyone and that they now fear for their safety. Almost as many victims reported that they feel powerless or helpless, while the majority of them are left feeling sad, depressed and betrayed.

Part of the hopelessness and paranoia may stem from all the ways that identity theft leaves its mark. More than 30 percent of the victims who responded said the crime caused them problems at work, either with their employers or with those they work with, while eight percent said it affected them at school with either the administration or other students. Some victims actually lost out on employment opportunities or even lost their jobs because someone had stolen their identity and used it in a way that came back on the victim. Some of the victims had their paychecks or their insurance benefits withheld due to the incidents, causing severe financial harm and the obvious distress that goes along with it. It’s easy to see how the financial turmoil can seem minor in comparison to the emotional upheaval. Money problems can be resolved, even if it takes time, but thinking that someone is using your good name to break the law is an endless kind of hurt. Knowing that your family members or coworkers think you’re a thief or an irresponsible consumer can break even the most solid bonds. It’s important that all consumers understand the aftermath of identity theft in order to be prepared, both financially and emotionally, should it happen to them or someone they care about.

Download now: The Aftermath®: The Non-Economic Impacts of Identity Theft