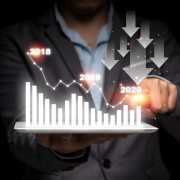 In 2019, the Identity theft Resource Center (ITRC) saw a 17 percent increase in data breaches compared to 2018. Credential stuffing attacks exploded in 2019, as well as third-party contractors being breached. 2020 has been a different story.

While scams are up due to COVID-19, publicly-reported data breaches are down in the U.S. Despite millions of Americans shifting to working from home – where cybersecurity and data protections may not be as strong as their regular workspace, the number of data breaches has dropped by one-third (nearly 33 percent) in the first six months of 2020 compared to 2019. The data compromise decrease statistics do not stop there. More significantly, the number of individuals impacted by breaches dropped by 66 percent over the same time period one year ago.

The 2020 data breach statistics are good news for consumers and businesses overall. However, the emotional and financial impacts on individuals and organizations are still significant. In fact, the impact on individuals might be even more catastrophic as criminals use stolen personally identifiable information (PII) to misappropriate government benefits intended to ease the impact of the COVID-19 pandemic.

Due to the increase in remote work, employees have less access to the data and systems necessary to easily steal PII. However, businesses and employees are also hyper-focused on preventing identity theft.

Unless there is a significant uptick in data compromises reported, 2020 is on pace to see the lowest number of data breaches and data exposures since 2015.

With that said, there is reason to believe the lower number of breaches is only temporary. Cybercriminals have been using the billions of data points stolen in data breaches during the last five years to execute different types of scams and attacks, which include phishing, credential stuffing and other exploits that require PII. With so much data being consumed and so much focus on improved cyber-hygiene, both at work and at home, the available pool of useful data is being reduced.

At some point, cybercriminals will have to update their data, which should lead to a return of the normal threat pattern. While there are signs of increased cyberattacks that – if successful – could lead to PII being compromised, it is too early to tell when the uptick may occur. Even then, it is more likely to be a “dimmer switch” approach rather than just flipping on a light switch, meaning it will not happen all at once.

The ITRC will continue to monitor all of the publicly-reported data breaches daily and analyze them to keep businesses and consumers educated on what the cybercriminals are doing.

If someone believes they have had their information exposed as part of a data compromise, or is a victim of identity theft due to a data breach, they can live-chat with an ITRC expert advisor. They can also call toll-free at 888.400.5530. Advisors can help victims create action plans that are tailored to them.

Victims can also download the free ID Theft Help App. The app lets them track their case in a case log, access resources and tips to help them protect their identity and more.

For more information on the ITRC’s data breach tracking and trend analysis, or if your organization would like to subscribe to our monthly data breach product, please email notifiedbyITRC@idtheftcenter.org.