Missing Stimulus Payment? Why Many Are Still Waiting for Their Money
Blog - Latest News 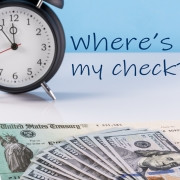 The message goes on to say the IRS expects the issue will be resolved soon, and stimulus payments will be deposited into the correct bank accounts within days. The Detroit Free Press also reports some taxpayers believe their money is going into the wrong bank accounts. Others say checks are being mailed to them when they received a direct deposit during the first round of payments in April 2020.

On January 4, the IRS issued a news release urging people to visit IRS.gov for the most current information on the second round of Economic Impact Payments rather than calling the agency or their financial institutions or tax software providers. The release says the IRS phone advisors do not have additional information beyond what’s available on IRS.gov.

On January 8, the IRS acknowledged some payments may have gone into a temporary bank account established when people’s 2019 tax return were filed, and they are taking immediate steps to redirect stimulus payments to the correct account for those affected.

The ITRC asks consumers to visit IRS.gov and to be patient throughout the process. We will update consumers if new information arises. Anyone concerned about a missing stimulus payment can also contact the ITRC toll-free either by phone (888.400.5530) or via live-chat. All people have to do is go to idtheftcenter.org to get started.

Who is the latest company to be breached? Again.