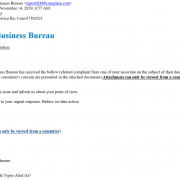 There is a new Better Business Bureau (BBB) complaint phishing scam making its way around that is hitting the inboxes of consumers, business owners and even charities.

Phishing attempts get their name from the wide net that scammers throw out, hoping to catch a few gullible people in the process. Some reports have even said that ridiculous stories and bad grammar are intentional. The reports have said it helps the scammers only catch the kind of people who are willing to believe that a major corporation sends out emails with terrible typos and awkward sentences.

However, this new BBB complaint phishing scam that appears to come from the BBB pretty much takes the cake: 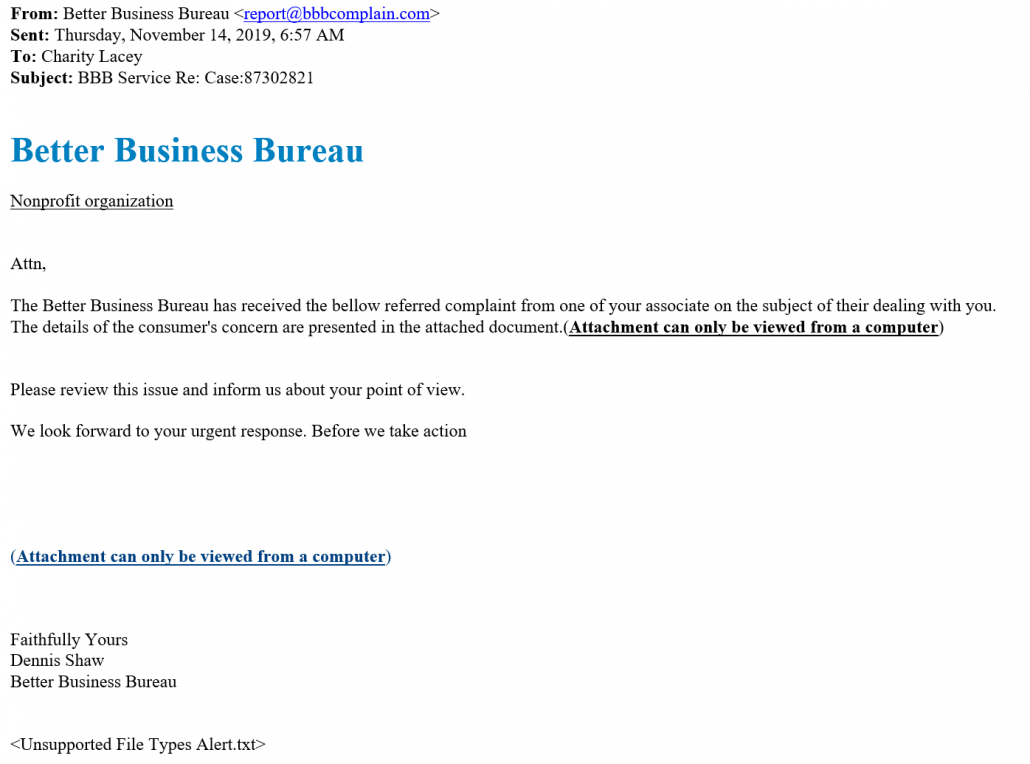 The Better Business Bureau has received the bellow referred complaint from one of your associate on the subject of their dealing with you. …We look forward to your urgent response. Before we take action on you”

As you can see, the author of this email does not pay much attention to the rules of standard English. Remember, though, that the goal is to only interact with people who would believe an email such as this one would really come from the BBB. Anyone savvy enough to spot the errors and understand that a national company would never release such a message is probably too worldly to fall for the BBB complaint phishing scam including the email address from “report@bbbcomplain.com”.

However, there is a dangerous aspect to the BBB complaint phishing scam, that being the instructions (removed from the middle of the message for brevity) telling the recipient to download the attachment in order to read the complaint against them. It is noted twice in the email that it must be downloaded to a computer to be read, which is actually not true. The goal is simply to get you to open the attachment, which will undoubtedly install harmful software on your computer.

In order to avoid scams like the BBB complaint phishing scam—even if there is a chance that the message is legitimate—make it a habit to never click a link, download a file, open an attachment or any other dangerous response. Even if you recognize the sender’s name and email address, do not click or open anything unless you were expecting it since their account could have been hacked or spoofed.

Also, learn to be a little bit of a “message detective” when you receive a strange email or text. Is the grammar up to par? Are there strange salutations, like “Dearest Sir or Madam” or simply “Attn” instead of a formal greeting? Do you even have an account with the bank the email supposedly came from? Or in the case of the BBB complaint phishing scam, do you even own a business? If not, how would you be cited by the BBB for complaints about shady business practices?

Remember, scammers do not care if you actually have an account or own a business. All they need you to do is be curious enough to click that attachment. From there, they can root through your computer and find what they want. Do not fall for it.

Be on the Lookout for 2020 Census Scams

Who is Responsible for Fraud Prevention? Join the Fraud Week Twitter Chat with... Scroll to top