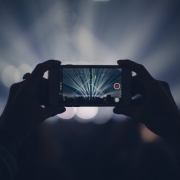 Standing in long lines, waiting to get into your favorite singer’s concert could soon be a thing of the past.

Ticketmaster has announced a new wave of technology that is already testing at certain venues in limited markets. Now, instead of handing over your ticket or scanning your phone’s screen at a concert, sensors can capture a peek at your face and compare it to your stored facial parameters. Just smile and wave as you breeze through the turnstile, right?

However, the process, which takes less than a second, is far from foolproof. Developed in conjunction with Blink Identity—a company that has developed this technology for military applications in the Middle East—Ticketmaster’s use of this kind of tool has already got security experts scratching their heads. What happens to your stored facial data? Who else can use it? How is it being protected?

More importantly, if Ticketmaster can use a nanosecond glimpse of your face to identify you in a crowd, then who else can do it, and how will it be used?

There are some less obvious concerns than the futuristic “what if” of using this technology for mass surveillance. First, there’s very little in the way of legislation concerning this kind of recognition and tracking, at least in the U.S. Only three states—Illinois, Texas, and Washington—have laws to protect the public from the unauthorized use of their faces or other biometric markers like iris scans or fingerprints and there are no federal laws in place at this time.

Another key issue is understanding who may already have this data and who can access it as a third-party to that company. Facebook, for example, rolled out facial recognition quite some time ago based on photographs that users uploaded and tagged with names. Any company that is entitled to use Facebook’s stored data could potentially use facial images and accompanying usernames. Currently, a class-action lawsuit over this practice is still underway.

Self-incrimination is another chief concern among advocates for stricter control over facial recognition. If merely walking down a street means surveillance cameras can spot you and put you near the scene of a crime at the correct time of day, the burden of proving the case shifts from investigators proving that you’re guilty to you having to prove you’re not.

Finally, a new report by The Independent demonstrates that facial recognition as a crime-fighting tool was ineffective in 98 percent of the cases. These findings, culled from freedom of information requests, found that only two out of 104 alerts were able to identify facial recognition from public surveillance cameras in the U.K. correctly.

As new technologies are developing and implemented, it’s important that lawmakers work to keep up with the potential uses—and abuses—of the innovation. While legal precedents remain, it will be up to consumers to determine for themselves what level of biometric use will make them comfortable.

The New Threat of Sim Swapping on Mobile Devices