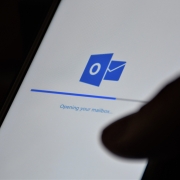 A new report reveals how frequently identity criminals use well-known brands to trick people into sharing their personal information. CheckPoint Security researchers say one company has jumped to the top of the heap when it comes to fake emails and fake websites involved in brand phishing attacks – Microsoft.

Every week, the Identity Theft Resource Center (ITRC) looks at some of the top data compromises from the previous week and other relevant cybersecurity news in our Weekly Breach Breakdown podcast. This week, we take a look at CheckPoint’s latest survey and what it means, as well as two data compromises that recently prompted consumer notices, and a ransomware group donating to charities.

There are different types of phishing attacks. What is a brand phishing attack? In this attack style, a cybercriminal imitates a well-known brand’s official website by using a web address and webpage design similar to the real thing. A link to the fake website is then sent to people by email, text message, or social media.

The fake webpage often contains a form intended to steal the credentials, payment details, or other personal information of the people caught in the phisher’s net.

While many of the spoofed websites are fake with poor spelling or grammar, these emails, websites, texts and social media accounts are increasingly sophisticated and highly accurate imitations that even trained professionals don’t spot at first glance.

As tolled, Microsoft was the brand used as bait in 19 percent of all forms of phishing last quarter.

However, Microsoft is not the only brand in the crosshairs of cybercriminals. The rest of the top ten brands currently being used in phishing campaigns include:

How to Avoid a Phishing Attack

The best way to avoid falling victim to all types of phishing attacks is to ignore unsolicited emails and texts that include links. If anyone receives a notice from a company where they do business, they should log in directly to their account to verify the message they received was real.

Anyone who gets a notice can also go to the company website directly and contact them. Under no circumstances should anyone click on a link or call a telephone number in an unexpected email.

We also want to tell you about two recent data compromises that led to consumer notices. Barnes & Noble – the online brick and mortar bookseller – acknowledged what they initially thought was a systems error earlier in October was, in fact, a cyberattack on some of the company’s systems.

Customer email addresses, billing and shipping addresses, telephone numbers and transaction histories may have been involved in the security breach. Barnes & Noble says there is no evidence of a data exposure. However, they are not ruling out the possibility.

The Barnes & Noble breach is different from the circumstances at the Dickey’s BBQ restaurant chain. Cyberthieves posted three million credit cards for sale on the dark web earlier in the month stolen from the popular eatery throughout 2019 and 2020. Security researchers believe 156 Dickey’s locations across 30 states likely had payment systems compromised by card-stealing software.

Finally, the ransomware group known as “Darkside” is trying its hand at brand building just like a legitimate company. This week Darkside announced they had donated $20,000 in bitcoins to two global charities. Darkside claims they do not attack schools, hospitals or governments, and instead focus on highly profitable, large corporations.

Security researcher Chris Clements notes, “The most troubling realization here is that the cybercriminals have made so much money through extortion that donating $20,000 is chump change to them.”

Neither of the two charities has acknowledged receiving the donation and say they will not keep it if it turns out to be true.

For more information about recent data breaches, consumers and businesses should visit the ITRC’s new data breach tracking tool, notifiedTM. It is updated daily and free to consumers. Organizations that need comprehensive breach information for business planning or due diligence can access as many as 90 data points through one of the three paid notified subscriptions. Subscriptions help ensure the ITRC’s identity crime services stay free.

If you accidentally click on a link of a brand phishing attack or provide information to what you discover later was a fake website form, contact the ITRC toll-free at 888.400.5530 or live-chat with an expert advisor on the company website. An advisor will walk you through the steps to take to protect yourself from any possible identity misuse.

If you receive a breach notice due to the Barnes & Noble or Dickey’s BBQ events or any other data compromise and you’d like to know how to protect yourself, contact the ITRC to speak with an expert advisor. Also, download the free ID Theft Help App to access advisors, resources, a case log and much more.

Join us on our  weekly data breach podcast to get the latest perspectives on the last week in breaches. Subscribe to get it delivered on your preferred podcast platform.

Read more of our latest articles below

Social Media Scams are on the Rise as More People Use the Platforms to Conn... Scroll to top