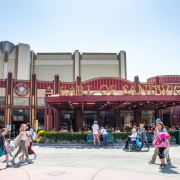 A recently announced restaurant data breach relied on a fairly old form of attack—retail point of sale systems—but thanks to the interconnected nature of several different companies within the single brand, there could potentially be a lot of victims. Earl Enterprises, which owns numerous restaurants around the US and in locations like Disney Springs, discovered their system had been compromised after malware was detected on their restaurants’ point of sale systems, or payment card “swipers.”

Anyone who dined at any of Earl Enterprises’ six specific brand locations between May 28, 2018 and March 19, 2019 may have had their payment card information stolen. The restaurants include Planet Hollywood, Buca di Beppo, Earl of Sandwich, Chicken Guy!, Mixology, and Tequila Taqueria. The investigation of the incident does not show that other restaurants owned by the company were affected.

The investigation is still ongoing, and Earl Enterprises has brought in two different cybersecurity firms to uncover what went wrong and how far the restaurant data breach may have spread. They are also working with the state and federal governments on the matter. Just to be safe, though, they recommend that their customers request a free credit check to look for any suspicious activity. You can also request a free credit freeze from each of the three major credit reporting agencies:  Experian, Transunion and Equifax.

There is another very useful tool for consumers that can prove vitally helpful following the announcement of any data breach. Breach Clarity, which recently won the Identity Startup Pitch Competition at the KNOW 2019 Conference, is an interactive database of breach activity. By searching for the name of a company, you can see a threat-score of how serious the event may be, as well as a list of actionable steps you should take if your information may have been compromised as a result.

Read next: Imposter Scams Were The Most Reported Consumer Complaint