Summer Lovin’? Not If A Scammer Targets You…
Blog - Latest News 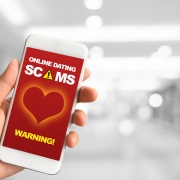 Ah, summer! What’s better than longer days, warmer temps and maybe a quick out-of-town getaway to enjoy the season? Why, a budding romance, of course!

Unfortunately, for too many victims, that newfound romantic interest might be something other than he or she seems. Romance scams are some of the cruelest, costliest forms of fraud. Preying on people’s loneliness and hope, the perpetrators have no qualms about not just stealing your money, but also leaving you broken-hearted, embarrassed and ashamed.

With the summer months in full swing, there’s no time like the present to identify the telltale signs of a possible scam and develop some strong self-protection skills:

1. The Out-of-Towner Love Interest – It seems like many romance scammers have one unifying feature: they work out of town or in career fields that keep them isolated. It might be on an offshore oil rig, a deep-sea fisherman, a deployed active duty service member, or any other plausible excuse to not be available to talk or message all the time. If you meet someone online with one of these specific or similar job areas, proceed with caution because that’s a huge red flag

2. The Struggling Widow – Many online scammers rely on the sob story to get money out of their victims. A typical scenario is a single parent with a wonderful child, as this allows them the chance to very quickly ask their victim for money. “My son’s computer broke and I’m away at sea, he’s going to fail the school year and lose his scholarship if he doesn’t turn in this paper…” Who would refuse to help a dedicated student while his parent is out of town? Again, romance scammers often rely on the widow/widower story to snare their marks

3. The Overly Zealous Significant Other – “I’ve never felt this way before… I hope I don’t scare you off, but I think I want to spend the rest of my life with you.” Romance scammers often take a long time to groom their victims, keeping the charade going for months before starting to cheat them. During that time, scammers may even work in shifts to ply their victims with sweet talk, text messages filled with hearts and flowers and more. By escalating the relationship quickly, the victim already feels invested in it. Refusing to give money to a desperate person after they’ve professed their love and started talking about marriage? Inconceivable

4. And Finally, Show Me the Money – When a romance scammer finally does come around to asking for money, there’s ALWAYS a reason. “I hate to ask you this, please feel free to say no…” but my mother’s utilities are about to be shut off due to an error at the bank and I’m away at sea, or our son’s tuition check didn’t clear and they’re going to kick him out of school right here at exam time if it’s not paid. Other, more sophisticated tactics even involve the scammer sending the victim a check or granting them access to their bank accounts, only to end up costing the victim money when they go back on their promise. Many victims have also reported being told to send the money via untraceable methods like Western Union despite supposedly knowing this person.

Here’s the real clincher about romance scams: far too many victims keep it going rather than admit—to others or themselves—that this was all a giant lie. There have even been reports of victims becoming part of the scam, helping to launder money or bilk others for funds. Do NOT hesitate to cut off any relationship that starts to smell like a fraud.

If you are ever asked for money from someone online, stop and think: why would this person need me to help? Where are the other people this individual could turn to? Then, try this: refuse. Be firm about not paying, no matter what excuse the other party gives, and see if it leads to the end of the relationship. Any legitimate love interest would immediately backtrack and apologize, but a scammer will double down with harsh comments, pleas for help, and any other statement to get the money out of you. Don’t fall for it, and don’t let love turn into heartache and loss by giving in.