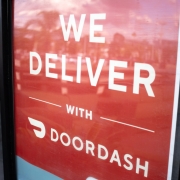 On September 26, 2019, a DoorDash data breach was announced by the popular food delivery app, leading to hackers accessing the company’s data system. Approximately 4.9 million customers, restaurants and delivery workers had their personal information exposed, including their driver’s license numbers, names and addresses and bank and credit card information. Users who joined after April 5, 2018 were not affected by this breach.

In a security notice regarding the data breach, DoorDash said earlier this month they became aware of unusual activity involving a third-party service provider. They then immediately launched an investigation that led to the determination they were hacked on May 4, 2019. DoorDash continued on to say that customers who signed up before April 5, 2018 potentially had their names, email addresses, phone numbers, order histories and the last four digits of their credit and debit cards exposed. However, full credit and debit card information was not accessed.

Delivery workers and restaurants could have had the last four digits of their bank account numbers taken. However, once again, the full bank information was not accessed. Approximately 100,000 delivery workers also had their driver’s license numbers hacked.

The food delivery app says they are reaching out directly to those affected by the DoorDash data breach with specific information about what was accessed. If consumers have any questions, comments or concerns, DoorDash has set up a call center that is available for 24/7 support at 855.646.4683. In the meantime, here are some things you can do if you think you may have been affected by the DoorDash data breach.

Anytime there is a data breach and you think you might have been affected, the Identity Theft Resource Center urges people to change their passwords immediately. Despite the fact that DoorDash says it will be reaching out to everyone affected, however, it is still a good idea to update your password and make sure it is a strong, unique password.

According to Identity Theft Resource Center’s 2018 End-of-Year Data Breach Report last year there were 1,244 data breaches reported. What that is less than 2017, the number of exposed sensitive information significantly increased.

In the event you are a victim of a data breach and have a incurred financial costs or expended time and other resources, the ITRC encourages people to be prepared so you can prove your case in the future. You can do that by downloading our ID Theft Help App, which has a case log manager tool to help track any actions you take in response to a breach.

If you were a DoorDash driver before April 5, 2018, you could have had your driver’s license stolen, as well as potentially the names and contact information. Delivery drivers might want to consider putting a credit freeze on their reports to prevent a criminal from opening an unauthorized account in their name.

It is important to note that a credit freeze will stop someone from taking out a credit card or loan in your name, but it does not prevent identity theft not related to opening up a credit account.

Be sure to track all your accounts daily for suspicious activity whether you were impacted by the DoorDash data breach or not. This also includes being very careful if you get any emails or phone calls from DoorDash. It is common for scams to happen following a data breach. If you see any suspicious activity do not respond and report it.

For more information on the data breach, you can go to Breach Clarity to see what information was exposed and see the risk score of the DoorDash data breach. You can also call the Identity Theft Resource Center toll-free at 888.400.5530 for assistance or LiveChat online.