People are using mobile apps more than ever before, says Flurry. With the exception of gaming, the report found a 58% increase in app usage across every category. 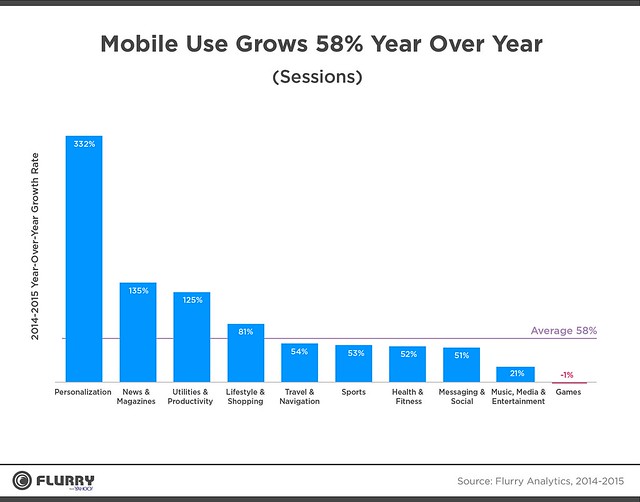 These numbers come from the a study by the researchers at Flurry Analytics, which is run by Yahoo!. By tracking 2.1 billion smart devices, the analytics firm documented over 3.2 trillion mobile sessions. Flurry cites app usage, as “a user opening an app and recording what [they] call a ‘session.’”

The big winners were the categories of personalization, news & magazines, and productivity––all reporting triple-digit growth.

Personalization apps, which include Android Lock Screens, Gif Keyboard, and more, saw the largest usage increase. The report found a 332% growth in the sessions. Flurry attributed the rise to the popularity of the more ‘fun’ aspects of communicating with others.

“When we looked deeper into the category, we noticed that the majority of the growth is coming from Emoji apps [that work with iOS and Android keyboards] giving consumers the ability to share customized correspondence in their favorite messaging apps, such as Facebook Messenger, Whatsapp, Line and Snapchat,” the report said. “It is not a surprise then to see Kim Kardashian’s app ‘Kimoji’ skyrocket to the number one spot on the Apple App Store, on its launch day.”

As with other trends of content increasing its influence on mobile apps, news and magazine apps also saw a significant increase of sessions. The report documented a 135% increase in mid-2015.

With a 125% growth, productivity apps came in with the third largest growth in usage. Due to the growing popularity among teens and college students, apps like Google Docs, Slack, and Quip have seen an explosion of use.

Lastly, lifestyle and shopping apps, which includes apps from retailers like H&M, Amazon, and Urban Outfitters, saw the 4th largest growth. The findings support reports from last year that documented purchases made on mobile devices accounted for 29% of online transactions in the U.S. and 34% worldwide.

This article was originally posted by Seamgen, a proud financial sponsor of the ITRC. Seamgen is an industry-leading mobile and digital agency on the forefront of technology—specializing in full-stack development, user experience design, web apps, and mobile apps. For more information on Seamgen or to read more of their content visit their website.