If you’re making a trip to Seattle, you probably have the famous Gum Wall at Pike Place Market on your list of to-do’s. If you haven’t heard of it the second-germiest tourist attraction in the world, the Gum Wall holds over two thousand pounds of chewed gum on it’s the walls.

Some tourists get creative and chew a whole pack to create an image or spell out words. However, it looks like gum isn’t the only thing people are sticking onto the Gum Wall.  It’s actually common for people to stick on coins, notes, spoons and even personally identifiable information (PII). 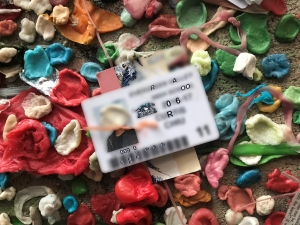 Pennies were actually one of the first items people would stick onto the wall with a piece of gum in the early 1990s. The Market Theater continued to clean the wall, but it didn’t seem to stop people from sticking gum onto it.  After the third round of cleaning, the market management decided to let the gum wall be.

Since then, the wall has become filled with business cards, phone numbers, full-names and more. It might seem harmless and fun in the moment, but this may be a threat to your identity later on. A study conducted by Javelin Strategy and Research found that there were 16.7 million identity fraud victims in the U.S last year. It’s important to safeguard your PII as a preventative measure to reduce your chances of identity theft.

It might not seem like a big deal to have your phone number exposed, but if it gets in the wrong hands the data within your mobile device can be compromised. By accessing your phone number criminals can send you scam text messages or phone scams. Both of which can contain phishing attempts or malicious software. This can all lead to a thief accessing your email accounts and change logins or even take money from your mobile wallet.

Even though sticking your old school ID or a business card doesn’t seem like it can do much damage it can cause many problems for you in the long-run. Avoid sharing your PII and keep it just as private as you would with your SSN.

The Gum Wall has only been cleaned once in 2015. So if you’re planning to stick something onto the wall be prepared for it to be there for several years and for millions of people to pass by it.

Read next: The Harm in Hoaxes on Social Media