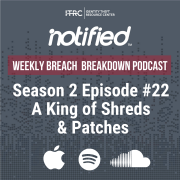 A King of Shreds & Patches

Welcome to the Identity Theft Resource Center’s (ITRC) Weekly Breach Breakdown for July 30, 2021. Our podcast is possible thanks to support from Experian and Sentilink. Each week we look at the most recent events and trends related to data security and privacy. This week, we discuss one of the primary causes of cyberattacks that leads to data compromises – known but unpatched software vulnerabilities and flaws.

In Shakespeare’s Hamlet, the troubled prince refers to his uncle, a usurper of the Danish throne, as a rag-tag monarch: “A king of shreds & patches.” That description also applies to how much modern software is riddled with known flaws that give cybercriminals an easy path into organizations. There’s a report out this week that gives us a clue into just how difficult it is to patch software, even when the bugs are well known.

Global cybersecurity provider NTT Application Security claims that cybersecurity teams are struggling to fix issues quickly. So far this year, the percent of application software being patched has dropped below 50 percent, partly because more applications are being tested in the wake of recent high-profile cyberattacks.

Still, the time to patch has not improved over time. The average time to fix the most severe software vulnerabilities and flaws in a large enterprise is 203 days. In some industries, the number is more than twice that figure. The time needed to fix software used in the agriculture and forestry sector is the highest at 513 days, on average. The education sector, a common target for ransomware attacks, is the second slowest industry and requires an average of 478 days to fix a known flaw.

How long does it take for a cybercriminal to exploit software vulnerabilities? A 2020 report puts the time to breach a system at as few as two hours once a flaw is publicly announced, usually at the same time a fix is issued.

The Consequences of Slow Response Times to Patch Flaws

The universally slow patch cycle where companies prioritize which software vulnerabilities they fix in what order has an unintended consequence, too. The lower the risk, the longer the time to patch. That allows cybercriminals to develop new attacks that link several lower-risk flaws into a single attack that is hard to detect and defend.

NTT Application Security’s research shows that the same kind of software vulnerabilities continue to appear in new and updated applications. Most of the flaws identified in the first six months of 2021 fall into the same five categories month after month.

What does that tell us? According to the report’s authors, it means that the people who are developing software and the teams that are protecting systems are not talking to one another, at least not enough to learn what bugs are common and how to fix them.

Most Applications Have At least One Software Flaw Open to Attack

There’s one last statistic from the NTT Application Security report that should be discussed. A majority of applications in 10 of the 11 leading industries tracked by NTT have at least one software flaw open to attack every day of the year. That explains why cybercriminals are successful at attacking businesses.

Next week, we’ll take a look at the ever-growing costs to businesses that suffer a data compromise as calculated in a new report from IBM.

If you have questions about how to keep your personal information private and secure, visit www.idtheftcenter.org, where you will find helpful tips.

If you think you have been the victim of an identity crime or a data breach and you need help figuring out what to do next, you can speak with an expert advisor on the phone (888.400.5530), chat live on the web or exchange emails during normal business hours (6 a.m.-5 p.m. PST).

Thanks again to Sentilink and Experian for supporting the ITRC and this podcast. Be sure to check out our sister podcast, The Fraudian Slip. We will be back next week with another episode of the Weekly Breach Breakdown.

Asked to Verify Your Identity? New Job Scam Aims to Steal Your Credentials