Thieves Use Emojis as Bait in Scams
Blog - Latest News 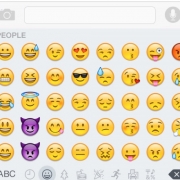 World Emoji Day is on July 17 with fun and more than a little emoji mayhem. Fun fact: the reason for this date is that it’s the one depicted in Apple’s emoji of a calendar. With all the attention on emojis heading to smartphone screens everywhere, and more than five billion emojis sent every day via the Facebook Messenger app alone, there’s no time like the present to set the record straight on some privacy pitfalls associated with the darling little characters.

Apple was one of the first major smartphone retailers to incorporate an emoji keyboard into its devices back in 2011. For years, users had to physically type the characters that would result in the understood emotion, such as 😛 or 😉 to express the point. Once the emoji keyboard appeared, though, scammers found a way to embed viruses and other malware into downloadable “aftermarket” emoji keyboards that can get into users’ devices. The enticement was access to additional emoji characters that the manufacturers hadn’t thought to include, and as a result, consumers fell into the trap of downloading malicious software in these files.

Since that time, emojis have become the bait-of-choice for scammers hoping to convince internet users that their posts are genuine and trustworthy. By filling their spammy announcements with hearts, flowers, smiley faces and other tiny symbols, they hope to lure unsuspecting users who think they’re dealing with someone who is friendly and trustworthy. Instead, the false front of light-hearted communication can lead to a far more sinister trap.

Emojis have also been found to be a common indicator in online romance scams. First, predators who are still in the grooming stage might send dozens of periodic messages throughout the day in order to convince the victim they’re thinking about them. Many such messages have been long strings of romance-themed emojis, like hearts and little bouquets of flowers. Also, with the understanding that romance scams are accomplished by crime rings who may have several different people operating as a single personality in shifts, some experts have suggested you can spot the differences in the people who are posing as that one person by how often and which emojis they use.

It’s also worth noting that the use of emojis has become a “language” all its own. Unlike rampant conspiracy theories about what different characters mean, there is some truth to the belief that certain characters have been co-opted and are indicative of sexual or even criminal behavior. Make sure you know which symbols really mean what you meant to say before hitting send!

Valuing Personal Information: Considerations for Prevention of Identity The...