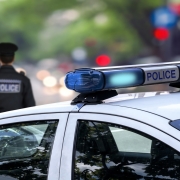 A newly reported LAPD data breach has affected thousands of police officers and officer candidates in the Los Angeles Police Department. According to the announcement, the information included names, email addresses, birth dates and parts of their Social Security numbers, which led officials to believe it may have been information that was used to set up their accounts while seeking employment with the LAPD.

An alleged hacker reached out to the city to inform them of the breach, then produced samples of the stolen information in the LAPD data breach as proof. The hacker claimed to have received it from external sources rather than by attacking the city’s servers. There is still no proof that the hacker actually has the complete file set instead of just the samples they provided. There is also no word yet as to what the LAPD data breach hacker intends to do with it or what action they expect the city to take next.

Targeting specific organizations or industries is common. Whenever a hacker has the opportunity to access stored data, it can often involve a hospital’s patient records storage or a school’s student files. It is not unheard of for hackers to target a specific police department or even to target the officers themselves, like the LAPD data breach.

For example, an unknown number of teachers were affected by the breach of the Texas Association of School Boards, which had stored profiles on school systems’ employees within that state. The compromised information included names and Social Security numbers. In 2016, all of the employees and former employees of the social media platform Snapchat had their complete identities stolen when a hacker sent a phishing message to someone at the company, pretending to be the CEO. Even the government is not immune from this kind of threat, as the Office of Personnel Management breach in 2015, in which millions of employees’ complete identities and biometric data like fingerprints were stolen, demonstrated.

For their parts, the City of Los Angeles and the LAPD’s police union are taking the LAPD data breach very seriously. Things like credit monitoring and notification letters are important, but victims of the LAPD data breach also have to be on the lookout for any unusual activity involving their identities. They can also place a free credit freeze on their credit reports in order to attempt to block unlawful activity.

How to File an Equifax Claim for Data Breach Settlement

How To: Place a Free Credit Freeze

Should You Consider Credit Monitoring Services as Part of a Breach? Scroll to top