Too Fast, Too Furious - Data Breaches on the Rise in April & May 2021 - Identity Theft Resource Center
Blog - Latest News 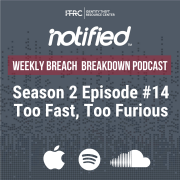 Too Fast, Too Furious

Welcome to the Identity Theft Resource Center’s (ITRC) Weekly Breach Breakdown for May 14, 2021. Each week, we look at the most recent and interesting events and trends related to data security and privacy. This week we’re highlighting data breaches on the rise the past 30 days in one of the most intense periods of cyberattacks and data breaches we’ve seen in a while.

With all due respect to Vin Diesel and the rest of the cast of the Fast and Furious movie franchise, we’re calling this week’s episode “Too Fast, Too Furious” because of the pace, scope and impact of identity compromising events over the past 45 days – some of which are still ongoing. We also have a quick update on the impact of the recent privacy tools added to iPhones and iPads.

In the ITRC’s most recent monthly report of data breaches, we highlighted three major events:

Each of these is unique in some ways but also reflective of broader trends.

In the case of GEICO, when announcing the data breach at the nation’s second-largest auto insurance company, officials said the stolen data was being used as part of unemployment insurance fraud schemes. Pandemic-related benefits fraud is estimated to be closing in on $100 billion. The ITRC is on pace to surpass the total number of unemployment identity fraud victims we helped in 2020 by the end of May 2021.

The events involving the Pennsylvania Department of Health and the ParkMobile parking app are two variations of the same issue: problems with third-party suppliers. In the case of the Pennsylvania Department of Health, the vendor supplying COVID-19 contact tracing services didn’t secure the personal information of 72,000 people. With ParkMoble, a third-party software issue exposed user’s personal information. Issues with supply chains are an escalating trend when it comes to data compromises, especially cyberattacks where threat actors can steal the data of multiple companies in a single attack.

More recently, an issue with third-party software also allowed users of the popular Peloton exercise bikes to see the personal information of other users. The flaw was found by an independent cybersecurity researcher who reported the issue to Peloton, which did not initially respond to his information. Ultimately, Peloton fixed the issue early this month, but not before opening three million subscribers to having their information exposed. Peloton has since acknowledged they have fixed the problem, and there is no evidence of anyone stealing the user information.

Finally, an update on how many people are taking up Apple’s offer to block mobile app owners from collecting and selling user data without first getting consent. Researchers guessed before the launch of the new anti-tracking privacy feature that as many as 80 percent of iPhone and iPad users would take advantage of the blocking technology.

The actual numbers based on early downloads of the iOS update is 96 percent of users are saying no to app-tracking. That’s a giant obscene gesture to companies that rely on third-party data for marketing and advertising and the platforms that collect and sell user information. Now here is the next question: Who will follow Apple’s lead in addressing the privacy and cybersecurity concerns of consumers?

If anyone has questions about keeping their personal information private and how to protect it, data breaches on the rise or on the new Apple privacy update, they can visit www.idtheftcenter.org. They will find helpful tips on these and many other topics. People can also sign-up to receive our regular email updates on identity scams and compromises.

If someone thinks they have been the victim of an identity crime or a data breach and needs help figuring out what to do next, they should contact us. Victims can speak with an expert advisor on the phone, chat live on the web or exchange emails during our normal business hours (6 a.m.-5 p.m. PST). Visit www.idtheftcenter.org to get started.

Be sure to listen next week to our sister podcast – The Fraudian Slip – when we’ll talk to the Chief Privacy Officer of Synchrony, a leading financial services company. We will be back in two weeks with another episode of the Weekly Breach Breakdown.