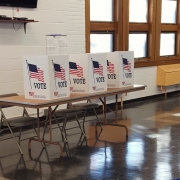 [vc_row][vc_column][vc_column_text]When news breaks of a data breach, consumers might envision a network of Dark Web hackers infiltrating a major target and stealing their files. However, a large number of data breaches are the work of a company’s employees. Sometimes, those employees have set out to steal information from the business, while other inside job data breaches are purely accidental.

That appears to be the case in yet another data breach that can be traced back to an unsecured Amazon S3 web hosting server. Many breaches have already occurred as a result of user error in password protecting these hosted file storage databases, but this time, the compromised information was voter registration records.

A data breach involving voter records might automatically make the public assume the worst in today’s political climate, so it’s important to point out that the compromised information includes a lot of data that is already publicly available to researchers, journalists and other interested parties.

In this event, an unsecured server allowed anyone who “stumbled” on it online to see information that includes full names, phone numbers, complete mailing addresses, political affiliations, birth dates and genders, demographic information that has been gathered and more. The database included records for more than 26,000 voters, according to a report by Bob Diachenko, head of communications for cybersecurity firm Kromtech Alliance Corp.

Diachenko found the information online after conducting a sweep for unsecured S3 web servers. The information belonged to a political robocalling company named Robocent, who sells individual voter records to anyone who wants them for three-cents apiece. The only thing Diachenko had to do to find this exposed database was search for the keyword “voter” in his hunt for unsecured servers.

Unfortunately, another service had already found the information. According to a report on this incident by Cyberscoop, “By the time it was identified by Kromtech, the server had already been indexed by GrayhatWarfare, another website that scans the internet for open S3 buckets.”

When Diachenko reached out to Robocent to report the compromised data, the response was less than satisfactory: “We’re a small shop (I’m the only developer) so keeping track of everything can be tough.” The information is now secured, but there is no way of knowing who else has already seen it.

Looking back at the information that was exposed, it might seem like fairly harmless, common knowledge-type data. After all, names and addresses need more protection. However, this type of database exposure is a gold mine for identity thieves who commit synthetic identity fraud; that type of fraud occurs when the criminal pairs existing identifying information with a made up or unissued Social Security number, essentially creating a fake person who has the victim’s name, address, and other data points.

Since members of the public have very little recourse when it comes to knowing if someone compromises their information, it’s more important than ever to monitor your account statements and credit reports, secure all of your accounts with strong, unique passwords and stay on top of anything suspicious that happens with your identifying information.

ith harsh comments, pleas for help, and any other statement to get the money out of you. Don’t fall for it, and don’t let love turn into heartache and loss by giving in.

Summer Lovin’? Not If A Scammer Targets You…

April the Giraffe is Expecting Again! Is She Also Due For a Privacy Checkup...