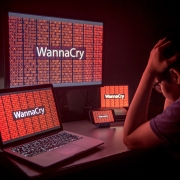 If you follow tech news, you may still get shivers up your spine from the buzz surrounding one of the most dangerous ransomware attacks in recent history. The May 2017 WannaCry attack made headlines for months due to the high volume of victims and the high-profile companies who were targeted. Within a short time, this self-replicating cryptoworm had infected more than 300,000 computers, locking up their systems and demanding payment from the victims in the form of Bitcoin.

As with all headlines, though, the story can fade fast when other news takes its place. And just like most other news stories, that doesn’t mean this one is gone just because people aren’t talking about it.

In fact, antivirus and security suite developer Kaspersky Lab issued recent findings that more than 75,000 new cases of WannaCry infections were discovered between July and September of 2018. Yes, only a couple of months ago, new victims were suffering from a well-known form of ransomware and having to decide whether or not to pay the criminals in order to regain access to their computers.

One of the major issues surrounding WannaCry is that a patch was available for it even before the initial attack. Consumers and businesses who were using older computers or older operating systems may have been more vulnerable, along with individuals who haven’t been installing recommended updates regularly.

Another issue some victims faced was not having a strong, up-to-date security suite with antivirus and anti-malware protection. A number of large-scale data breaches have been traced back to inadequate protection for a computer or network, and in some cases, the original victim was not the major corporation who was ultimately the target.

One of the best courses of action against WannaCry or any other form of ransomware is to create scheduled, automatic backups of all your files. These backups can be stored in a cloud-based subscription or an external storage device, and they’ll mean you can still access all of your files if someone targets your system. Paying the ransom might be cheaper than a new computer—the typical WannaCry ransom was $300, but other ransomware attacks have demanded more—but there’s no guarantee the hackers will release your files upon payment. That money can be put towards newer equipment instead of lining a cyberthief’s pockets.