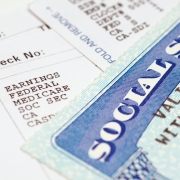 When people think about identity theft, they tend to envision credit card fraud, check fraud or other crimes that can affect their finances. The reality is identity theft crimes fall into several different categories, mostly based on what a thief is after.

If a thief manages to get a hold of someone’s personally identifiable information, opening a new credit card is the least of his or her worries. With a Social Security number, an identity thief can file a fraudulent tax return, stealing any potential refund and causing a lot of headaches down the road. Even worse, it can happen every year. In 2019 the IRS reported over 3,500 fraudulent tax returns with nearly $16 million claimed in fraudulent refunds.

No one likes the thought of someone pretending to be them, but most people don’t give much thought to someone pretending to be them in order to get a job.  Fraudulent employment means a person’s W2 statements at the end of the calendar year will reflect that they earned more money than they actually did, impacting the taxes owed. It can also potentially land a person in hot water if they are receiving government benefits. If someone is drawing unemployment insurance or if they have been placed on medical restrictions and are drawing disability insurance benefits, it won’t be long before someone comes to collect those funds back due to their “other” job.

Government identity theft is a very common form of it is the fraudulent use of someone’s information to apply for various federal assistance programs. SNAP benefits (commonly referred to as “food stamps”), unemployment benefits, disability benefits or Social Security benefits are all targets. The fundamental problem is that a person’s information is tied to assistance payouts for which they are not receiving. The biggest concern is that the same person could find themselves legitimately in need of these benefits, but will not receive them because they have already been claimed.

If someone is a victim of government identity theft, they can contact the Identity Theft Resource Center for toll-free, no-cost assistance at 888.400.5530. They can also live-chat with an expert advisor.

For on-the-go assistance, people can check out the free ID Theft Help App from ITRC.

ITRC’s Letter to Federal Lawmakers regarding the Paycheck Protection ...

Looking to Give during COVID-19? Don’t Fall for a Charitable Giving Scam Scroll to top