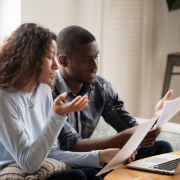 Social media can be a lot of fun, but perhaps nothing can give you quite the midday giggle like a Twitter hashtag game. They often end up being very witty, such as the game to “ruin a movie title with one letter” or “ruin a book with one word.” The often-hilarious end result includes things like “Pilates of the Caribbean” or “The Lion, the Witch, and the Wardrobe Malfunction.”

A recent Twitter hashtag game asked social media users to come up with the best response to this ominous direction: #AlsoFoundOnMyCreditReport. As expected, the results were fairly hilarious, like these gems:

While the “following your dreams” response could be a hint about mounds of student loan debt on the user’s credit report, some of the other tongue-in-cheek reactions were a little more dire. One Twitter player shared that he had once discovered his wrong birth year was on his credit report, another mentioned that their father-in-law’s car accident was listed (possibly alluding to an error or intentional child identity theft), and still another mentioned her surprise at learning that a past DUI was listed.

You actually have three credit reports, one from each of the three major reporting agencies. As a consumer, you’re entitled to one free copy of your report each year from each of those agencies, so here’s a neat way to stay on top of things: request one report in January, another report in May, and the third report in September. You’ll get an ongoing look at your credit report throughout the year, rather than waiting until you’re notified of a problem.

So how do you get your credit reports? You can sign up for free at annualcreditreport.com, Be warned, there are a lot of imposter sites and even scams out there that take your money or your identifying information. Make sure you’re only giving your info to a genuine, trusted source. If you prefer, you can request your copies by contacting the agencies yourself at: www.annualcreditreport.com or by mail:

Be sure to provide your name, birth date, and Social Security number when making the request.