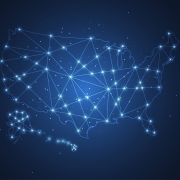 Depending on where you live, your chances of becoming a victim of identity theft may increase, according to a new study by WalletHub. The study tracked three different avenues of this kind of crime and ranked each state by its prevalence in those areas. All fifty states and the District of Columbia were then assigned a ranking for each of the three areas, plus a combined overall score.

Surprisingly, one of the longstanding frontrunners for identity theft just barely made the top ten. For many years, Florida has been one of the worst states for this crime, both in terms of total numbers of victims and in total the amount of money lost. According to these new findings, Florida is ranked 10th overall.

The factors the team used to come up with their scores included the number of per-capita identity theft complaints, per capita fraud complaints and the amount of money lost to these crimes per capita. When comparing the states with the highest numbers of issues to the states with the lowest numbers, they also discovered the difference between the highest and lowest was often exponential. Some top five states were twice as likely to have incidents as the lowest five. In some categories, the most vulnerable states were even five times as likely to experience this crime as the bottom five states.

The District of Columbia topped the list for the overall combined score. It was followed by California, Nevada, New Hampshire, South Carolina, Delaware, Louisiana, Texas, New York and Florida. Strategically, these states have very little in common in terms of location, population size or even income level. It goes to show that identity theft can be a crime of opportunity and intention rather than targeting.

You might breathe a little easier if you live in Missouri, Maine, Arkansas, Hawaii, Kansas, Oklahoma, West Virginia, Vermont, Wyoming or Kentucky. They ranked numbers 42 to 51, with Kentucky being the least vulnerable for identity theft. However, that does not suggest that residents in those states can let their guards down. It just means that they are less likely to be victimized than residents of other states, and not completely free of this crime.

No matter where you live, though, you can take proactive measures to reduce your risk of identity theft-related attacks. Freezing your credit report, practicing good password security, being mindful of oversharing your personal data and getting a good grasp on how to spot phishing attempts are all excellent ways to work towards a more secure identity.

The Most Dangerous Celebrities Online: Being a Fan Can Lead to Malware Atta... Scroll to top