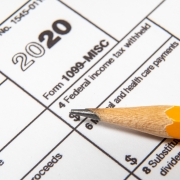 Tax season is right around the corner. On February 12, the Internal Revenue Service (IRS) will begin accepting and processing 2020 tax returns. While consumers look for their W-2 forms for wages and 1099 forms for non-wage income, some consumers may find themselves victims of 1099-G form fraud from an identity crime that started to spike in the spring of 2020.

The Identity Theft Resource Center (ITRC) has already begun to receive phone calls and live-chats from victims stating they received a 1099-G form, wondering what to do next. According to The Vermont Labor Commissioner Mike Harrington, in Vermont, 1099-G forms for nearly 44,000 people were sent to the wrong address after a likely mix-up.

These are issues the ITRC and IRS recently discussed on the Fraudian Slip, the ITRC’s podcast, where we talk about all-things identity compromise, crime and fraud, including the impact identity issues have on people and businesses.

Also, the Department of Labor Inspector General has informed Congress that as much as $26 billion or more in fraudulent pandemic-related unemployment benefits have been paid. California officials say the amount of fraud in the state is at least $11 billion.

As staggering as the numbers for unemployment benefits fraud were in 2020, the number of people who found out they were impacted by the fraud could rise even more once tax season begins. More Americans than ever are likely to receive 1099-G forms that report how much government benefit income a taxpayer received. If an identity criminal used someone else’s information to file for unemployment benefits, the benefits are considered taxable income that will be reported to the IRS by the state paying the benefit. While states are aware of many fraudulent payments, some fraudulent unemployment benefits may have gone undetected. The IRS expects to see a rise in taxpayers that contest their 1099-G forms claiming they did not receive any unreported income from government benefits.

What Consumers Should Do

There are several steps that consumers should take if they receive an inaccurate 1099-G form.

If anyone believes they are the victim of 1099-G form fraud, unemployment benefits fraud or both, they can contact the ITRC toll-free for help. Victims can call to speak with an advisor (888.400.5530), live-chat with an expert or send an email during business hours. All people have to do is visit idtheftcenter.org to get started.

ID Policy Forum 2021: Identity, Authentication and the Road Ahead