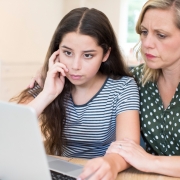 The second Wednesday in October is one of the most important holidays we have since it impacts every single citizen in the world. National Stop Bullying Day is not only an awareness campaign about a crucial global issue, it is also one that impacts young and old, rich and poor, every race and nationality.

There was a time when bullying meant schoolyard taunts or some rude graffiti. Now, it encompasses horrific crimes like cyberbullying, including sextortion, doxxing, identity theft and account takeover.

The first step to stopping these and other cyberbullying problems is to understand when it is even happening. For too many people, especially parents of younger victims, the truth only emerges after something far more serious occurs. This guide contains more details, but some common signs include withdrawing emotionally, repeatedly missing school or work for no apparent reason, increased need for funds and dramatic behavior changes.

The organization Stomp Out Bullying has some great resources for this year’s important campaign, which can be found on their website. This article by the Cybercrime Support Network can also help. However, recognizing that cyberbullying is a very serious matter, one that can affect adults as well as young people, is the most important step anyone can take to avoiding this threat.

Stay Safe Online also offers a lot of helpful solutions, such as:

Be aware of the threat and who is at fault

Cyberbullying can encompass a lot of different behaviors, including identity theft. Knowing when you or someone else is being bullied online is important. An innocent person can be targeted by a hateful “keyboard commando,” but it is important to examine our own behaviors and make sure our interactions are positive and supportive, and do not lead to escalating behavior.

Too often, the issue escalates but the posts that began the problem get lost. Without evidence, there is little that schools or law enforcement can do to the offender. Screenshot and save these posts in order to provide proof so that action can be taken.

Without open, ongoing conversation about cyberbullying, many victims feel powerless to put a stop to it. Make sure to have numerous conversations with your family before and after allowing computers and devices in the home.

File a complaint when a problem is detected

It can feel like cyberbullying is a faceless crime, but it is actually not. Someone is behind it, whether it is a stranger or someone you know. Even if there is not much that can be done to prosecute an offender in a given situation, having a record of it with the police will be important if it escalates or involves identity theft.

A lot of people love their devices, and technology addiction is a recognized problem. However, when it comes to someone’s health and happiness, stopping the bullying is more important. You can start by blocking the offender on these platforms, but that might not be enough. It might mean avoiding a certain account or platform altogether, or simply creating a new account. That will be far healthier in the long run than enduring others’ abuse.

The single most important thing you can do if you or someone you know is being bullied online is to take it very seriously. There is no such thing as “harmless” insults in a world where anonymity combined with access to personal information affords perpetrators the ability to hurt people. Talk to the people you care about and provide support when it is needed.

National Cybersecurity Awareness Month (NCSAM): Own It. Secure It. Protect It.

National Cybersecurity Awareness Month (NCSAM): Own It. Secure It. Protect...