What Can a Thief Do with Your Driver’s License? - Identity Theft Resource Center
Blog - Latest News 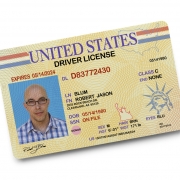 With so much media attention focused on computer hacking, cybersecurity, and digital identity theft, it’s easy to forget those good old-fashioned thieves can walk away with your identity, too. In this case, it’s something as mundane as losing your wallet or having your purse stolen, but the implications of losing your driver’s license can still have a serious impact on your identity as a whole.

NOTE: This is a really good time to mention that you should not carry your Social Security card in your wallet. There will almost never be a circumstance in which you have to supply it at a moment’s notice. If you know you’re applying for a job or filling out paperwork for a bank loan, just remember to get it from your important documents and bring it with you.

If your wallet is stolen, it could go either way for your driver’s license. Sure, it could be a simple matter of a teenager wanting to present it when trying to buy alcohol. It’s still wrong, but it’s not going to have much impact on you. But if your wallet or purse was stolen by a veteran criminal, he may just use your identity when trying to avoid brushes with the law because of his own outstanding warrants for serious crimes. One of the most common ways an ID thief does this is in traffic violations.

If he’s pulled over and presents your driver’s license, then you are now the person who technically received the traffic ticket, even though he’s the guy who wadded it up and threw it in the passenger seat before happily driving off. When he fails to pay that ticket or fails to appear in court, depending on the severity of the violation, the judge will issue a bench warrant for your arrest, one that you know nothing about and will blissfully not resolve.

The odd thing about bench warrants of this kind is that they often go unnoticed for long periods of time. The police are little busy catching criminals, so your unpaid parking ticket isn’t going to lead to a manhunt to bring you in. Instead, when you have some reason for the police to check your name like a background check for work or a traffic stop of your own, that bench warrant will suddenly reappear and ruin your day.

If you know that your wallet or license has been stolen, it’s important to get a police report on the incident. Unfortunately, it’s happened that individuals don’t take that step because they aren’t one hundred percent certain that it wasn’t just lost. Nobody wants to involve the police and make accusations of a crime over a simple mistake, and they don’t get the police report. That report is going to be important, though, if you’re standing in front of a judge in a few months trying to explain that this was all a big misunderstanding!

Once you have the police report and you’ve stored it in a safe place with your important documents, you also need to request a DMV report. Do this step after enough time has passed for an incident to have occurred; waiting six months to a year isn’t too long. The report itself may cost you a few dollars, and it’s a good idea to check it periodically. Depending on your state, it may be free or it may not be a lengthy process, it might be as simple as just inquiring when you renew your license plates as to whether or not there are any unresolved issues on your driving record.

If there are issues, the DMV report will have the court docket number and the phone number to contact the court about it. Luckily, DMVs are now connected across the different states, so you no longer have to worry that the violation and resulting legal action took place half a country away. This report can help you be sure that your name isn’t floating out there in the system and associated with criminal activity.

If you have additional questions about the process, contact the ITRC toll-free at (888) 400-5530 or livechat with an identity theft advisor at www.idtheftcenter.org

How much information are you putting out there? It’s probably too much. To help you stop sharing Too Much Information, sign up for the TMI Weekly.

Missing Laptop Leads to Breach of More Than 3,000 Children’s Identities 5 Ways a Business Should Prepare for an ID-Theft Breach