What do I do if My Passport is Lost or Stolen in the United States? - Identity Theft Resource Center
Blog - Latest News 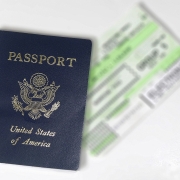 2. You can report a lost or stolen passport via mail, phone, or online. In all instances, you will need to fill out Form DS-64: Statement Regarding Lost or Stolen Passport.  This is incredibly important to do as soon as possible after the discovery of theft or loss in order to avoid the use of your passport for illegal activities including, but not limited to, criminal identity theft.

3. Once your passport has been reported lost or stolen it is invalid and cannot be used again. You will need to apply for a new passport in person by filling out Form DS-11: Application for a U.S. Passport. A specialist will take a report over the phone and your passport will immediately be deactivated.

4. If your passport was stolen, file a police report. A crime has taken place and should be reported to the police. Also, you never know when you may need proof that the document was stolen. In most places, you can file a police report for a non-emergency online. If the passport went missing from a home burglary or a stolen purse, make sure to specify that the passport is among the things missing.

5. If your passport number was stolen in a data breach, but you still have your passport in your possession, there is no way to flag your passport to alert authorities.  Passports numbers can be used in conjunction with other pieces of personally identifiable information (PII) to commit criminal identity theft.  Contact the National Passport Information Center at 1-877-487-2778 or NPIC@state.gov for more information about the steps that can be taken if you are concerned your passport number may be used by someone other than you.

Losing a passport or having one stolen can be scary. However, if you follow the above steps you will be back to your jet-setting ways in no time… or 2-4 weeks. More importantly, you have taken steps to protect yourself against the chance of identity theft.

Anyone who believes their identity has been stolen or their personal data has been compromised is invited to connect with the ITRC through our toll-free call center at (888) 400-5530 or on-the-go with the new IDTheftHelp app for iOS and Android.

Eva Casey Velasquez as its new President/CEO I’m a Victim of Identity Theft…Should I File a Police Report?